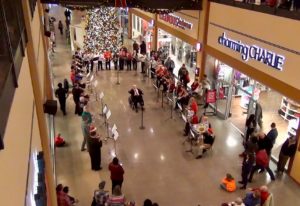 As you knew from my last blog, Ken Brader’s Holiday Brass had their annual holiday performance on Friday, December 22, 2017 at the Outlets at Sands Bethlehem in Bethlehem, Pa.  It marked our fourth time playing at the Outlets and over 40 years that the group as been performing at Christmas time.  This year was a little more special as it was our CD release event.  Having just recorded our first CD in July 2017, we finally had them ready for release at this performance.  Because the group only performs once a year, there is always excitement and energy to be found among the members. Since many of them are regionally located, some do not have an opportunity to see each other during the year so this performance makes for a nice rekindling of friendships.  Plus, on top of that, people are excited for Christmas, spending time with family and friends and even enjoying some time off.

The ingredients of these factors always make for a great night and the euphoria of the season is made official by this performance.  But, for this year, the release of the CD more than added a next level of  “coolness” to it.  For many, this was their first time being part of a recorded album.  We all own cd’s and take it for granted, but, when you get to see your name listed on a professionally made cd, there is just something very special about that.  I designed and created the artwork and liner notes for the album and Discmakers from Pennsauken, NJ made them for us. Since I had put this together, I obviously was aware of what it looked like and was used to seeing it.  But, for the members, it was a cool experience for me to see the look of excitement and feeling of accomplishment on many of their faces. As we handed out the cd’s and they finally had a chance to see them for the first time, that was well worth the time and effort in designing this project.   Our CD, REJOICE, was finally available and after so many years, we now have a professional recording that will last forever.  I do believe that many of us DID rejoice that night in celebration of a wonderful event all led by founder and trumpeter Ken Brader.  For without him, none of this would be possible.

Since scheduling in December is never easy, our attendance can vary and usually does.  But, this year was really awesome as we had one of our largest groups ever with 43 people playing! 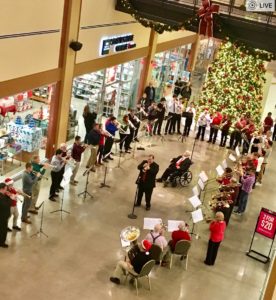 We had 2 great shows and both Ken I really feel this was one of, if not, the best performance of the group in many years if not ever.  Whether it was the cd or something else, the night was just great for everyone and the sound was awesome.  One thing that made it special for me was the addition of a few long time members who had not played with us in many years due to scheduling and travel.  Paul Chepolis and Eric Martin were former students of Ken’s and had not played in almost 20 years.  When I was in high school, Eric went to rival Easton HS and we spent many years playing together at Christmas time.  I hadn’t seen Eric in many years.  He came up as a surprise to Ken and his parents and it was awesome to see him there.  Paul also went to Easton and is a few years younger than I am, but it was great to have him back and be able to relive and tell stories of the past.  As the eldest member of the group, this opportunity was really good for me. To be able to not just see longtime friends but also perform with them was a great feeling. 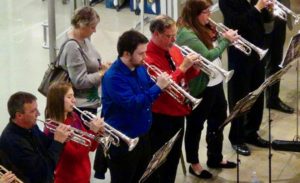 I am very thankful to everyone who played and helped to make this night a great success.  Ken was so overjoyed and full of emotion that this was an even greater night for him.  With all the health issues that Ken is dealing with, it is such a good feeling to see him have such a rewarding night and a chance to lead again. 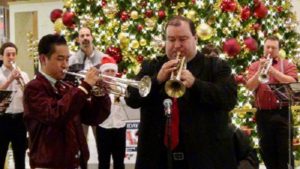