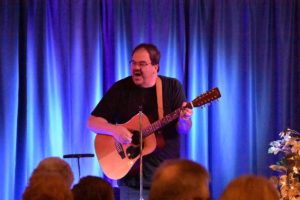 On Saturday, April 28th, the Bethel Memorial Baptist Church held their second annual Coffee House event in our downstairs multipurpose room.  I am very pleased to say that it was an awesome night and was attended by 150 people!  It far exceeded the amount we had at our initial event in October and I am very happy and thankful for a great night for the church.

As head of the coffee house committee, I am in charge of or have to be a part of just about everything.  But, I welcome the opportunity and am happy with how well everything turned out.  The night featured a diverse line up of entertainment from sacred to secular and even a little rhythm and blues.  Featuring members of our church as well as a few guests, the audience was Blessed with such wonderful talent. I had the privilege of directing the Victory Voices once again as we sang Instrument of Peace and Stand By Me.  Both went well and I am so thankful to the men for giving of their time and talent. We also had a few acts where the musicians took the time to talk about a funny story in their life or to speak about the love of their spouse.  Crooner Joe DeMaio, dedicated the song “Longer”  by Dan Fogelberg to his wife.  However, she was unaware that he was going to sing this as well as walk towards her as he was singing ending with the lyric “I’m so in love, with you” followed by a kiss! How romantic!! Then we had Sam Bodder who grew up with his grandfather singing the very funny song “Pretty Little Dear “ from 1927, which spoke of a gentlemen’s girlfriend who had a very healthy appetite! Considering it was humor of the 20’s, the way he told the story was classic and well loved by the audience. 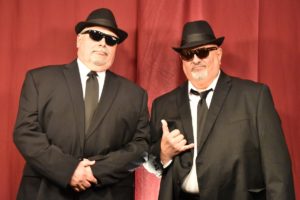 The highlight of the night was how we ended it.  Advertising in the program as “guests from Chicago” we featured Jeff Barrows and Jerry Crivellaro teaming up to be Jake and Elwood Blues of the Blues Brothers to sing Soul Man. Of course, the lyrics were changed a bit to reflect the term Soul Man and to tie-it in with our church. Since no one had any idea this was going to happen, it was a surprise and by far the best moment of the evening. To see two husky guys over 6ft tall moving and dancing around like their fellow mentors was hilarious and awesome.  The fact that this was so unexpected is what really made their act. Yes, they sang well, but, here you have two Board of Trustee Members in a role that you would not expect.  It was priceless. 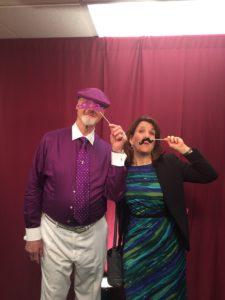 Similar to our first event, we had plenty of food for everyone. From hoagies and chicken sandwiches to hot pretzels and desserts, there was something for everyone and plenty to go around.  What we did have this year which was really neat was a red carpet style photo booth in our lobby.  Anyone who came in could have their picture taken in front of a classy screen well lit by photography lighting.  We also had plenty of props, both serious and fun, if you wanted to pick up a fake mustache or a pair of funny glasses. Many photos were taken ranging from nice family pics to humorous outtakes.  It was really a nice addition to our event and everyone seemed generally happy to oblige.

It was always my vision to offer an event for the church that can bring people in and create a sense of togetherness, outreach and community all while keeping the focus on the Lord.  I really feel this event accomplished that.  I have seen where some groups will focus solely on witnessing for the Lord to guests before they have even made a connection with them.  For some, this method may work. However, my desire is to bring everyone in to have a fun night and allow them to feel comfortable and at home in our church.  I don’t want anyone to feel like we only wanted them there because we thought we could get them to become members. Not the case at all. If we don’t make personal connections and relationships first, none of that can really happen anyway.  With the entertainment, food, photo booth and general enjoyment of the night, our church is experiencing two things. We are seeing great attendance at our newly discovered social events as well as inviting others and sharing our building, family and fellowship with others.  Since the church never had anything like this, both events have proven that people will come out to socialize with their friends all while realizing we are in church and it is because of the Lord that we are all there!

Hopefully we can keep this moving forward and maybe we can see you at the next one!