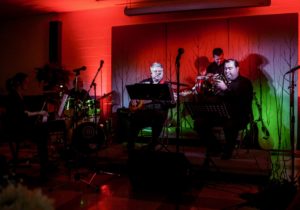 On Saturday, May 13th the Pilgrim Presbyterian Church hosted their third Redwood Café Coffee House in Memorial Hall.  The event was designed to support the mission of Fair Trade Coffee and Tea grown by farmers across the world in poverty stricken regions.  The mission was celebrated through the financial support of those who attended.  The love for social justice of this cause was clearly evident.  It was the most well attended coffee house so far with over 100+ guests.  The night featured several performances from church members and our own Bethel Memorial Baptist Church Jazz Quintet.

The group is comprised of myself on trumpet, Rick Case on drums, Joe DeMaio on bass, Oscar Duarte on auxiliary percussion and Jennie Tielman on piano.  Jennie was unable to make it so Linda Pettinelli (my sister) filled in quite ably for her. We played “Leaning on the Everlasting Arms” and “When the Roll is Called Up Yonder”.  This was the first time that our jazz quintet has performed outside of Bethel.  When the coffee house date was set, I thought it would be great to include this group to have an opportunity to perform for a different audience away from the church campus.” 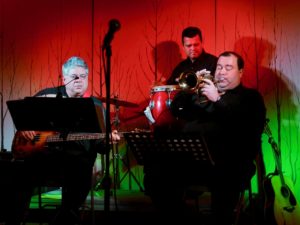 The members of the group beside myself mainly only perform with the praise team at the church.  So, when this opportunity came along, I knew it would be a great chance to get out of our comfort zone. I’ve always believed that anytime an ensemble or performer has a chance to play outside of their regular spot, it can only strengthen them. When you go to a venue that is new, there is a sense of uncertainty and you don’t always know what to expect. It actually draws everyone closer because the only thing that you can rely on initially is each other.  It is natural if you are in an unfamiliar place to cling to what you are comfortable with.  So I thought from this aspect it would be a nice bonding experience for all of us.  Then, when you begin to perform you know it sounds a little different and that forces your ears to be even more focused to what is going on.  This is always my favorite part.  When you begin to hear your music and it sounds a little different than the way it usually does, it allows you to take more chances and develop more creativity.  I believe the members of the quintet did just that on Saturday.  I felt Oscar was playing more unique rhythmic patterns and whether he recognized it or not, was branching out and expanding on the parts he normally plays. The same was true with Rick. I felt his drumming had a different vibe to it as he added some neat new grooves to both songs.  Both added a nice touch to the music allowing us to really feed off of one another.  All of these experiences I believe, will help us in the future as we continue to grow and build on the success we are having. Overall, we are most happy to be able to Glorify the Lord through our music! We were very grateful to have the opportunity.

In addition to performing, I also had the privilege of running sound and lights.  I had recently purchased some new LED lighting so I was excited to be able to use them. Memorial Hall, which is used for Sunday school, the boy scouts and an occasional covered dish was transformed so nicely with the ambiance and feel of a real coffee house. 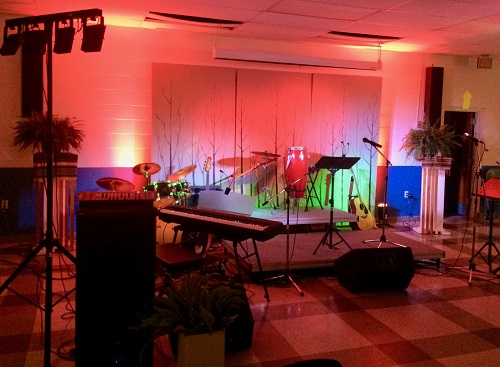 The night was awesome. Everyone had fun, loved the entertainment and enjoyed reminiscing with the trivia contest.  As I said, “It was a great night for the church”!  The mission aside, the fact that it was a miserable rainy Saturday and yet still drew a record crowd is a great sign of strength and growth occurring within Pilgrim.  As of now, there is talk of wanting to schedule another coffee house in October.  I am already looking forward to it with plans to grow the event even more.

More information regarding the Presbyterian Coffee Project of Equal Exchange and Fairly Traded Coffee can be found on the website http://equalexchange.coop/pcusa