For a while now, our church has not had a choir.  We do have a praise team vocal quartet that sings for worship but, in terms of a choral group, we have not had one in quite some time.  Our former choir director stepped down and departed for another church about a year and a half ago. So, there has been a void in having a larger choral ensemble to sing in church.  A few months back I volunteered to engineer a better use of our sound system in the front of the church.  I figured out how to improve the situation and ordered the necessary equipment.  I set the gear where it needed to be and came to a praise team rehearsal to instruct everyone on what I did.  As I was there, the idea came to me to create a men’s vocal ensemble.  We have a good amount of men who sing, but have never sung together formally. I felt like this was something I had to do. I approached the church and they were thrilled with the idea of creating a new ensemble. This would be something like they have never had.  In fact, I do not know of many churches in the Lehigh Valley that offer a men only ensemble.

Once I got the approval to go ahead, I began soliciting members to sing.  To my surprise, it wasn’t a difficult thing to do.  Excited men came to me wanting to be a part of it.  Maybe it was just because it was something new, but, whatever it was, the addition of a new group appealed to many people.  I also decided that we would tie in the first performance of the group with our upcoming coffee house on October 28. I knew if we began and already had a performance to prepare for, we would have a goal and something to work towards right from the beginning. 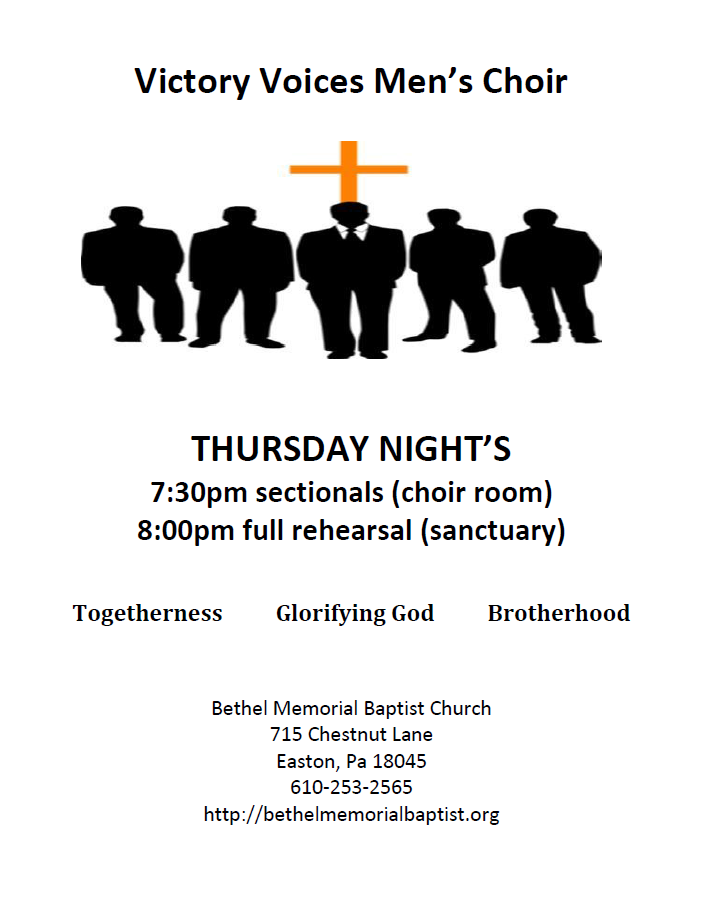 We began rehearsals on Thursday, September 7th and had 13 men in sign up!  I had hoped we would get maybe 6-7 but never thought 13 would want to sing. And, on top of that, no one has dropped out! Everyone seems like they are having a great time.  Like all choirs, we have a mix of members with a musical background and some who have never sung in public before.  I have never had the opportunity to direct a men’s choir before, but, I am really enjoying my time so far.  My goal has been to create a fun learning environment where the men can come on a Thursday night and put whatever stress they are dealing with on hold and just enjoy the rehearsal.  I’ve always believed that if someone is giving up time with his or her family to come to a rehearsal I am directing, I know it has to be productive. I want them to leave with a sense of satisfaction and that it was time well spent.  I also want to inject humor and laughter.  I believe when someone is relaxed, they can absorb more instruction and perform better.  I want the men to want to come to the rehearsal and look forward to our time together.

Well, I am very happy with where we are right now and the progress we have made.  There has been a noticeable difference from the first rehearsal to now.  I am seeing the men show enthusiasm and excitement about singing. Singing for the Lord! We even have decided on an identity.  We are now Victory Voices.  A great name suggested by our most senior member, Sam Boddard.

If you cannot attend our coffee house on Saturday, October 28th, we are also singing the next day in church at 10:30am.  Come out to hear us, you won’t be disappointed.

Here is the address of the church if you are interested in coming to hear Victory Voices.