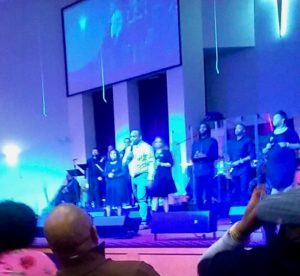 On Saturday, March 4, 2017 I had the privilege to travel to Wilmington, Delaware to be a part of a recording session for Anthony “Chip” Bailey. Anthony is a very talented composer, arranger, vocalist and saxophonist whom I had the privilege of meeting in 2015 while I was performing for The Resurrection Center of Wilmington, DE for their Thanksgiving Cantata. Chip was playing the saxophone and since I had never played the cantata, was very friendly in helping me get up to speed on the procedures. Between The Resurrection Center and Calvary Baptist in Dover, DE, I’ve had the privilege to play with Chip on multiple occasions. Every time I saw him he was alive with life and you could always find a smile on his face as he was so happy to be at the performance to Glorify the Lord.

When we played in November 2016, Chip told me that he was going to be recording his own LIVE album in March of 2017 and asked if I would be a part of it. I was honored to have been asked and although it was still three and a half months away, I was looking forward to it and knew it would be something fun. 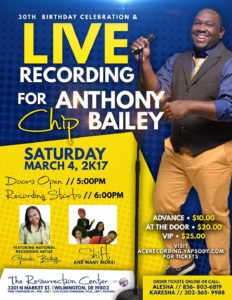 He had a date set for March 4th and about two weeks before got in touch with me to make sure I was still good to play. The session wasn’t just a studio album recording. It was a Live video recording as well. He was actively advertising it on Facebook and other social media and tickets were selling pretty well. He sent me the music for the first song called “I’m Excited”, a song speaking to his excitement for the purpose of the recording session.. Glorifying God. It was a really good song with great horn parts. I had no idea it was an original of his or that he had that much talent to compose! I received other music from him all original music. Each was just as good as the next if not better. I have worked with artists who have their own music and you usually get a mix of good and bad. But, Chips music was all inspiring of praise to the Lord and you could sense his passion in each song.

When I arrived at The Resurrection Center on March 4th for the recording you could feel a sense of excitement throughout that today was going to be something special. I also learned that it was also his 30th birthday!! As I met the other horn players, one who was his brother, I learned that everyone had known Chip previously and were all equally excited to be supporting him on this project. He put together a nine-piece band and a six piece back up vocal ensemble. He also had two special guest groups to sing as a warm up act and intermission act. He also featured his mom, Glenda Bailey, who is an accomplished national recording artist herself. Wow, a full recording was in store for everyone.

The recording began at 6:00pm and the sanctuary had well over 100 people ready to support him and show praise to the Lord. It was very obvious that this was a long time dream of Chip’s and today was the culmination of that goal. Chips’ energy was infectious to us all and there was a great sense of togetherness and synergy in the room. We were all there to support his vision of praise and worship and I couldn’t be happier with just how well everything went. He was a dynamic performer and so appreciative to everyone who was a part of it. But, it was all of us who were so appreciative of him for letting us be a part of his special day.

Since it was a Live recording, video and audio recording were strictly prohibited so I could not record any clips or take any photos on my phone. But, as soon as the recording is ready for release, I will certainly pass it on to everyone. You won’t be disappointed.